The world wide web is the greatest source of knowledge that mankind has ever had at its fingertips. We live in an age of data and information, where any question you could possibly have can be answered in less than 5 minutes, thanks to search engines, social networks, wikipedia and dozens of other sources of information spread across the web.

Many internet service providers around the world believe that a unrestricted access to the internet is pivotal to modern internet users' lives. This concept was coined as Net neutrality by a media law professor from Columbia University in 2003. Net neutrality is the principle that all Internet Service Providers (ISPs) treat all data that can be found on the internet in the same way. There should be no discrimination of data on the internet relating to its users, content, platform, application or how it communicates with other websites and users. This principle was widely accepted by ISPs around the world and is the golden standard for internet usage. Many experts believe that net neutrality fosters free speech across the internet as well as encouraging democratic debate and participation to take place online. So how would an ISP violate the principle of net neutrality? There are several ways in which the provider could get caught red handed. ISPs, according to net neutrality, cannot intentionally block, or slow down (throttle), or charge any form of money to view and visit certain websites or other online content. Many governments around the world have declared net neutrality as a governmental mandate, and can have serious legal repercussions, such as very large fines. 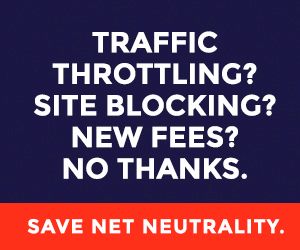 Several years ago, Global telecommunications goliath, AT&T were found guilty of purposefully throttling and limiting access to the app FaceTime, so that only users who shelled out the extra cash for the companies new shared data plans could have access.

So it came as a shock when the United States Federal Communications Commission (FCC), decided that they no longer wanted to have net neutrality within the US in early December last year, dissolving their only two year old, "Open Internet Order" (designed to allow fair access to all internet users within the US). Internet giants such as Google, Facebook and Netflix, stood in defiance of the downfall of net neutrality within the US, but to no avail. Fear of blocked content, services and applications from the now free-to-do-as-they-wish ISPs spread throughout the country, and With the US not having a very wide source of ISPs to choose from, internet users couldn't simply take their business elsewhere if they were left unsatisfied. The three rulings that were overturned by the FCC were the following:

An example of this was seen by a Portuguese mobile carrier company called Meo. Where the company was selling packages of applications which had to be bought in order to use. E.g, "Messaging" (containing WhatsApp, Skype, Viber and several other vital messaging application in our current day and age). There was also, "Social", which contained almost every single social media website, which could only be accessed if internet users took out their wallets. Europe however, remained steadfast. The current EU policy (2015-2120), supports and protects net neutrality, yet after Brexit, the UK government could overturn their stance on net neutrality. Yet many consider that that is highly unlikely, as many of the European nations individually committed to the Finnish Universal Service Obligation, which makes access to broadband a legal requirement. Yet, Britain is currently making efforts to make itself the "safest place to be online", by mainly cracking down on age restricted content and regulations surrounding social media websites.

Back home, the South African government remains in favour of net neutrality and the enforcement of its principles. The government wants to preserve and protect the "Free Internet" for its people as well as limiting and stopping, where it can, unfair treatment by intermediaries online.

At Vanilla, we pride ourselves on giving our customers unshaped, and unthrottled access the internet, aligning ourselves with net neutrality. To ensure that your experience online is as obstacle and frustration free. Internet reliability and speed form part of our foundation as an ISP.